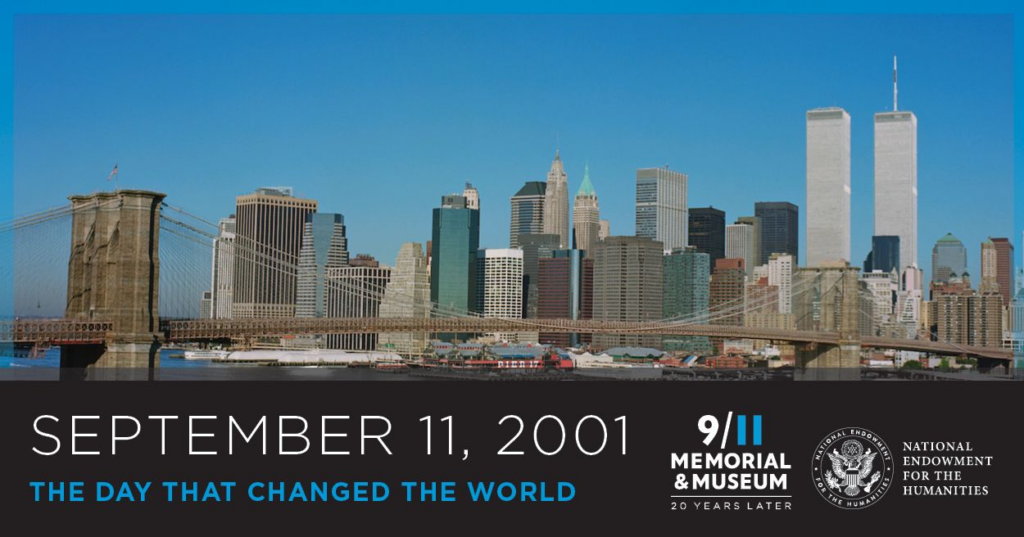 New York Times-bestselling novelist and screenwriter Taylor Jenkins Reid will be the featured author for The Peters Township Library Foundation’s Novel November. The literary event will be held on Thursday, November 4, 2021, at 7:00 p.m. at the Peters Township High School Auditorium at 121 Rolling Hills Drive in McMurray. This will be the fourth program in the Novel November series. Previous featured speakers include Yaa Gyasi in 2017, Tim O’ Brien in 2018, and Anna Quindlen in 2019.

Tickets are now on sale at https://ptlib.org/TJRtickets. You can also purchase tickets at the library’s circulation desk. Out of an abundance of caution, masks will now be required at this event.

Taylor Jenkins Reid is the New York Times bestselling author and screenwriter of several novels that explore love in all its complexity. She writes and speaks candidly about women’s issues, relationships, marriage, and the writing process.

Reid’s newest novel, Malibu Rising, is a New York Times bestseller that follows the four famous Riva siblings who throw an epic party to celebrate the end of the summer. The events of the night in 1983 reveal the many secrets that shaped this family’s generations, and the Rivas lives change forever. With her beloved, signature style, Reid writes a powerful story of historical fiction that explores fame, family, identity, and the impact of secrets unraveled. Malibu Rising is a #ReadWithJenna book club pick and is set to be adapted as a Hulu television series.

Her previous novel, Daisy Jones & The Six (another New York Times bestseller), details the history of a fictional rock band from the 1970s and what led to their rise to and fall from fame. In addition to writing the novel, Reid also wrote the lyrics for each song featured in the book. Before its publication, the novel was picked up by Reese Witherspoon for her monthly book club, and by Hello Sunshine, Witherspoon’s production company, for an Amazon limited television series starring Riley Keough. Daisy Jones was named one of the best books of 2019 by several media outlets, including NPR, The Washington Post, Esquire, Glamour, Real Simple, Good Housekeeping, Marie Claire, and more. The audiobook has also received critical acclaim and was named one of Apple Books’s Best Audiobooks of 2019.

Reid is also the author of the acclaimed novel, The Seven Husbands of Evelyn Hugo (also a New York Times bestseller), which follows the story of a fictional Hollywood icon and her glamorous life and marriages. A television adaptation of Evelyn Hugo is in the works, with Reid writing the series adaption. Her other books include One True Loves, Maybe in Another Life, After I Do, and Forever Interrupted. Reid’s novels have been Indie Next picks and have been featured in People, US Weekly, Entertainment Weekly, Good Morning America, Goodreads, and more. She lives in Los Angeles.

As you are aware, Governor Wolf, in coordination with the COVID-19 Vaccine Joint Task Force, announced that mitigation orders except masking will be lifted on Memorial Day, Monday, May 31. In line with these new orders, I wanted to give you an update on our library operations. We will be providing more information about in-person, outdoor programming soon, but here are the changes effective June 1, 2021:

*Masks are still mandatory for all unvaccinated persons in all public spaces.

*Six computers will be available for public use on the 2nd floor, up from four computers.

*Three study rooms on the 2nd floor for individual use only, one person per room.

*Two chairs per table on the 2nd floor and the booths in the non-fiction area will be fully open.

*No fines for overdue library materials and the first 10 prints from our computers are free.

*Tables and chairs will be available in the Youth Services Department, including the Teen Room.

*HVAC renovations are still underway in the building. Please be aware that this may cause a temporary disruption in services, as well as issues with the building temperature.

If you have any questions about these changes, please email me. We hope to see you soon in our library building!

We are happy to announce that the Peters Township Public Library is able to provide PT Library cardholders with digital access to The Wall Street Journal from anywhere! The Wall Street Journal is one of the largest newspapers in the United States, providing coverage of breaking news and current headlines from the US and around the world and is published 6 days a week.

Simply click here to create your account, and you can start using wsj.com immediately. Your access will be available for the next 3 days.  After 3 days, simply come back and click the above link again, and log in as an existing user with the same username and password you originally created. Please note, your sign-on credentials are for your personal use ONLY and cannot be shared with other individuals. Any violation of this clause will result in Dow Jones terminating access.

The WAGGIN Network would like to save you time and to help you avoid overdue fines. Beginning Monday, May 3, 2021, we will automatically renew your eligible items two days before the due date. Our policy is two renewals for books and one renewal for DVDs if no one has placed the item on hold.

The items will not renew automatically in the following cases:

How can you confirm the WAGGIN network renewed your items?

You can still renew items early yourself. And you can always return items before they are due, so we can share them with others.

If you do not receive email or text notifications but would like to, send an email containing your library barcode number to ptlib@ptlibrary.org.

The Peters Township Public Library is expanding our services for the community beginning Monday, April 26, 2021. Masks will still be required for everyone over age 2 in the building. All areas in the library are open for browsing for books. You may check out materials inside the library at the main desk on the 1st floor. There are no fines for overdue materials.

Four computers on the 2nd floor will be available for public use for one one-hour session per day. Computer appointments are encouraged. Patrons with a WAGGIN card may call the library’s Reference Department at 724.941.9430 #2 to schedule appointments up to 24 hours in advance, one time per day.  Printing will be available from the computers with the first 10 prints free of charge. More than 10 prints will be charged ten cents/page for bland and white, fifty cents/page for color. Please bring your own headphones for computer usage, if needed.

Three study rooms on the 2nd floor will be available for individual use for a two-hour session. First come, first served – no reservations taken. If no one is waiting to use the room, you will be permitted to extend your time.

Limited seating will be available in the library for individual reading or study. Single chairs are ready at our tables, and seating in other areas will meet social distancing requirements. No tutoring is permitted in the library.

The majority of our programming will continue to be offered virtually, but we will be offered a limited number of programs outdoors at the library or nearby Peterswood Park, weather permitting. Visit our Event Calendar to learn more.

Areas of the library that remain unavailable include the Family Activity Center, Cafe Lee, and Conference/Meeting/Reading Rooms. The daily book sale is suspended, and we are unable to accept book donations.  Library volunteers have not been contacted to help. Food and drinks are not permitted in the library, but you are welcome to enjoy those items at our outdoor patio area.

Please email us at ptlib@ptlibrary.org if you have any questions. We look forward to seeing you soon! 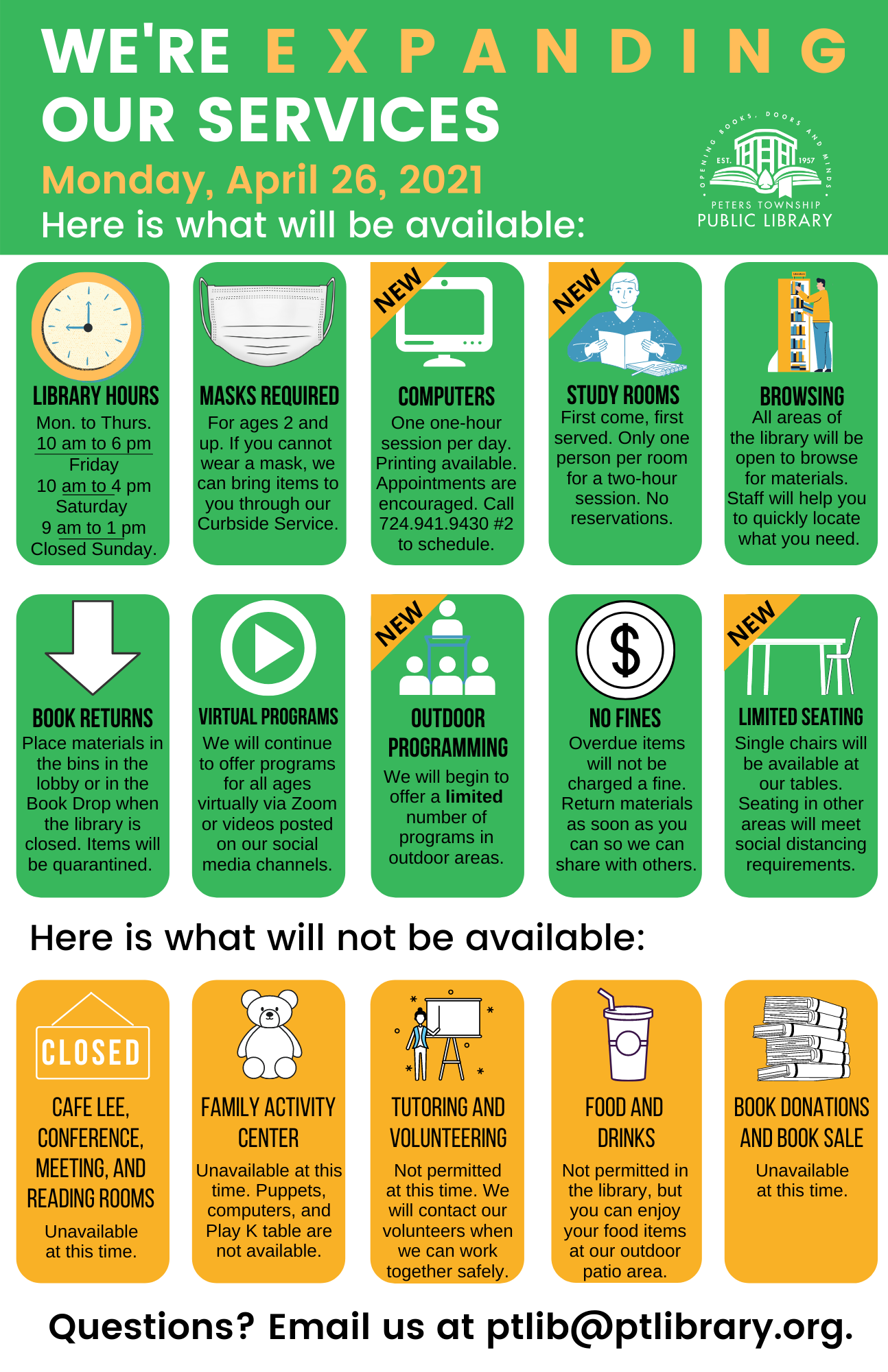